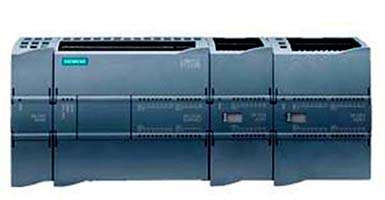 You can also find information about SIMATIC S7-200 in Catalog ST 70:

The SIMATIC S7-1200 is the controller for open-loop and closed-loop control tasks in mechanical equipment manufacture and plant construction.

Due to the compact modular design with a high performance at the same time, the SIMATIC S7-1200 is suitable for a wide variety of automation applications. Its range of use extends from the replacement of relays and contactors up to complex automation tasks in networks and within distributed structures.

The S7-1200 also increasingly opens up areas for which special electronics was previously developed for economical reasons.

Application examples include, for example:

The SIMATIC S7-1200 family consists of the following modules:

The SIMATIC S7-1200 is equipped with different communication mechanisms:

The following protocols are supported:

The following can be connected:

Connection between PG and CPU of SIMATIC S7-1200

Connection between Basic Panel and CPU of SIMATIC S7-1200

Communication modules permit communication via point-to-point connections. The RS232 and RS485 physical transmission media are used. Data transmission is carried out in the “Freeport” mode of the CPU. A user-specific, bit-oriented communication protocol is used (e.g. ASCII protocol, USS, or Modbus).